The ‘missing cautions’ ~ a note from SOSJ’s Chairman. In response to a comment made by Lee Henry, MD of the SoJDC, to our Facebook post last Thursday night, here is a statement received today from our Chairman Michael du Pré. 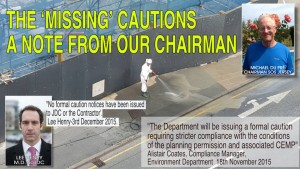 On 24th October 2015, SOSJ made formal complaints to the Planning and Environment Minister, Deputy Steve Luce. On 18th November the Compliance Manager, Department of the Environment, Alistair Coates, responded to SOSJ in writing, regarding dust emissions:

The Department will not initiate action, at this time, in respect of dust emissions and air quality, but will be issuing a formal caution requiring stricter compliance with the conditions of the planning permission and associated CEMP.

And regarding water contamination:

Following your letter, it was evident that some water seepage from the site onto the pavement had occurred on at least one occasion. The situation was, potentially, then compounded by the contractor washing that water into a surface drain on Castle Street.

This, in itself, could have constituted an offence under the Water Pollution Law, but that is not a law administered by my team.

Nonetheless, Environmental Protection Officers visited the site and have, subsequently, issued a caution to the contractor that steps have to be taken to ensure that contaminated or potentially contaminated water is preventing from entering any drains on, or off the site.

It is clear that, either Mr Coates has been very late in issuing his caution about air quality (3 weeks have passed since the above) or that Mr. Henry has simply not been informed about it by his own staff.

As regards the water contamination, it would appear that Mr. Henry has simply not been informed of the caution.

Although the contractors are in both cases at fault, it is SoJDC, a States owned and Treasury Minister controlled company, who are responsible at the end of the day for all the above.

Whose heads are going to roll?

Hi all – I just wanted to respond to this post to clarify some of the information here, as there are a number of inaccuracies in this statement, I also wanted to state JDC’s position on this.

Water escaping from No.4 JIFC site – No formal caution notices have been issued to JDC or the Contractor. A letter has been sent referring to an incident that occurred when water was seen escaping from the site. This water came from the drilling rig when it hit the sea wall. The water came from the rig as it was being used to cool down the drill when drilling and was not contaminated.

Dust Monitors – The dust monitors that were required to fulfil the planning conditions were onsite throughout the excavation. The monitors SOS have referred to in this statement were actually in excess to the equipment that was required under the planning conditions and were acquired to monitor dust outside the site as a further precautionary measure. As the conditions had already been met by the contractor, contrary to what SOS say, no condition was breached.

It’s unfortunate that because SOS are against this development, they are choosing to create public fear and criticism by posting misinformation. We are all entitled to our opinions, however this is simply inaccurate and misleading to the public.

In reply to a couple of questions, our reply was:

To be fair to Lee, it could be that he hasn’t received the caution notices yet? We have been notified of these by Environment. I’m not sure really what else we can do – I suppose we can publish the letter as Lee doesn’t seem to believe us? But I was hoping that JDC would respond properly (and responsibly ) and demonstrate that they will now comply with the conditions (as they have been requested to do) by the Compliance Manager.

As for the dust monitor situation there is a condition attached to the permit (5.4.3 of the CEMP) and I would ask Lee if he will enforce it and why he hasn’t done so:

” Will you be requiring the Contractor o follow the specified best practice in developing “a dust monitoring strategy in association with an air monitoring specialist Contractor “ as set out in, in Section 5.4.3 of the CEMP ?

And finally as for our opinion about public safety: It is a fact that dust from a very hazardous site has blown across public areas at several times and particles, possibly of asbestos, will certainly have been ingested by the public. Whether they will cause harm in years to come is an unknown but we believe that it was a public health hazard – how can it not have been?

Where are the missing Cautions?!