Foreshore furore! Our letter in today’s JEP perhaps best sums up this debacle, and is shown below. You can also see the report on today’s ITV Channel News. 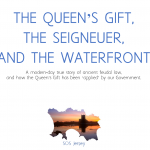 Our full report can be viewed or downloaded here (PDF opens in new tab/window).

On 12th June 2015, it was announced that Her Majesty the Queen had generously ‘gifted’ to the public of Jersey, the ownership of the Island’s seabed and beaches, by way of a Deed. The public had previously leased the Foreshore at a nominal rental of £4,500 per annum.

This apparently beneficial change of circumstances, which in the words of Lieutenant Governor General Sir John McColl stemmed from “Her Majesty’s wishes to support the interests and aspirations of the people of Jersey as expressed through their elected representatives….”, was not considered in the States Assembly, by these representatives to agree a planned outcome, but rather, privately arranged by a select group of senior Ministers and officials, perhaps following unvoiced fears that a successful Seigneurial land claim, such as the embarrassing £10m ‘settlement’ to Les Pas in 2003, could be repeated?

The announcement was accompanied by media coverage showing walkers striding across our beautiful beaches and explanations that, thanks to Her Majesty’s generosity, the foreshore could not only be enjoyed by the public but other benefits would also result from exciting new wind and power projects.

However, no sooner had the ink dried on the Deed, than unpublicised ‘benefits’ started to materialise.

Chunks of the public’s foreshore were transferred to quangos whose policies are managed and implemented outside States control. Jersey Property Holdings (JPH), who were recently criticised by Comptroller and Auditor General for failing to implement a property strategy, got ‘busy’ in a way that the Crown had never done.

The Department of Infrastructure (DfI) began applying ‘fines’ on behalf of JPH, pursuing homeowners for minor alleged foreshore encroachments (long benignly ignored by the Crown) and to which the Deed made no reference. Homeowners coming to sell were presented with huge bills, not even being allowed to see the arbitrary valuations that they were expected to pay for!

On 11 April 2018, a States of Jersey Complaints Panel considering the case brought by two local residents affected, concluded that the actions of JPH were “unjust, oppressive or improperly discriminatory” and “contrary to generally accepted principles of natural justice”.

The Minister was instructed to refund the difference in perceived land values to the Complainants, but as yet JPH have rebutted the findings and a Scrutiny report is awaited.

Her Majesty would surely be very embarrassed if She was aware that Her subjects would be so poorly treated as a result of Her generosity?

One hopes that the current Chief Minster will ensure the implementation of the findings of the Complaints Panel.