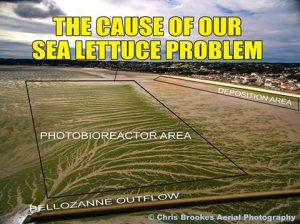 Two months later he was ‘removed’ from the Council of Ministers (we know not why) and the project was cancelled. Neither we or the public were told the project had received the green light.

**Had it been implemented, we would today perhaps have already seen an improvement in the sea lettuce blight.**

WE ARE NOT ALLOWED TO ATTEND IMPORTANT MEETING.

SOS Jersey members had been invited to go by Deputy Hilton; we set aside time to do so and prepared relevant materials…

…but the Minister, for reasons not divulged, will not meet us.

Reluctantly, we have to respect Eddie Noel’s wishes in order to get this process started and the problem hopefully sorted.

We are very disappointed and somewhat taken aback and bewildered to have been ‘shut out’, but will carry on doing what we can.

HERE’S WHAT WILL HAPPEN TOMORROW

Tony Legg is flying in from Ireland and will present his interim solution to prevent the sea lettuce from adhering to ‘grow on’ in the inter-tidal area and then floating off when mature, to gather in mats by the sea wall. The cost would be minimal compared to the huge cost of importing a French sea harvester which would not do that.

We will report progress.

TAKE A LOOK AT THIS!

The picture below illustrates the problem. You can plainly see that the effluent from the Bellozanne outflow is feeding the sea lettuce which grows in huge swathes across the beach there.

The cause of Jersey’s sea lettuce problem