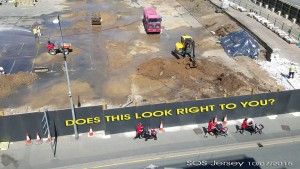 So JDC plough ahead with work for the first building on what has been officially designated a ‘Red’ Category, High Risk Site (otherwise known as Jersey’s International Finance Centre).

Correspondence from Environmental Health to Planning on 20th March 2013 specified that the site is designated thus and is at odds to assurances given by the SoJDC in a meeting with members of SOS Jersey that only 4% of the site would be contaminated and the materials could be separated and removed safely.

Environmental Health agree with TTS and say: ‘.. the site can broadly be considered to be affected by ground contamination, asbestos as well as as and stress that the contractors must not let dust escape to the general public, who are referred to as a ‘sensitive receptor.’

The letter goes on to say: ‘…should any unexpected contamination be found during the approved development, work will cease and the Department of the Environment contacted immediately.’

SOSJ consider that it is foolish to allow pedestrians (and babies and children in particular) to be exposed to possible polluted dust from work being just a few yards away (see photo).

An ‘exclusion zone’ should perhaps be created as a precautionary measure, warning signs erected, and that work should not be carried out in winds of over force 2 on site. Only this Wednesday, dust clouds were blown across pedestrians on the Esplanade from a pile of topsoil. This is contrary to the conditions laid down. (Today the soil was being hosed down.)

Surely this is not right?

2 thoughts on “Surely this is not right?”