The mystery of the missing cautions – Our integrity questioned – We respond.

The 21st December saw two letters in the JEP (Jersey Evening Post): one from SOS Jersey Chairman Michael du Pré, regarding the results of the recent dossier of public complaints sent to Planning, and their response, and a reply from Lee Henry, CEO SoJDC. 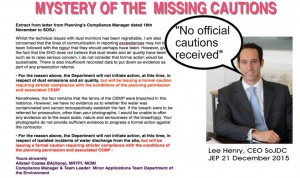 Lee says neither SoJDC nor the contractors have received the two formal cautions. This casts doubt on the integrity of the SOS Jersey team who have spent some months in preparing the dossier for the Planning Minister, whose Compliance Manager Alistair Coates responded to us on18th November last. Mr Coates confirmed that he had issued two formal cautions – presumably they would have reached the contractors and/or SoJDC as developers? So where are they?

Lee accuses SOSJ of disseminating ‘misinformation’ and using social media to do so. We did let him know through these pages of the cautions, but it does not seem he believes their existence, so we paste below the two paragraphs in question and would ask that if he has not received them he contacts Mr Coates at Environment forthwith as they are important documents and need to be acted upon.

If Environment did not issue them then there is a bigger problem in governance. We hope that the situation is resolved and look forward to an assurance from Lee Henry that he understands that SOSJ have not fabricated the relevant letter.

ON DUST:
“Whilst the technical issues with dust monitors has been regrettable, I am also concerned that the lines of communication in reporting exceedances may not have been followed with the rigour that they should perhaps have been. However, given the fact that the EHO does not believe that dust levels and air quality have been such as to raise serious concern, I do not consider that formal action would be sustainable. There is also insufficient recorded data to put down as evidence as part of any prosecution referral.
– For the reason above, the Department will not initiate action, at this time, in respect of dust emissions and air quality, but will be issuing a formal caution requiring stricter compliance with the conditions of the planning permission and associated CEMP…”

ON WATER:
“As my role does not extend to legislation administered by other sections or Departments of the States, I will not delve further into the work of the Environmental Protection Team.

Nonetheless, the fact remains that the terms of the CEMP were breached in this instance. However, we have no evidence as to whether the water was contaminated and cannot retrospectively establish the fact. If the breach were to be referred for prosecution, other than your photographs, I would be unable to offer any evidence as to the exact scale, nature and seriousness of the breach(es). Your photographs do not provide sufficient evidence to progress a formal action against the contractor.

– For the reason above, the Department will not initiate action, at this time, in respect of isolated incidents of water discharge from the site, but will be issuing a formal caution requiring stricter compliance with the conditions of the planning permission and associated CEMP -“