As reported in today’s JEP (which was nearly accurate), SOSJ are going to work with the French, collecting data about sea lettuce, and pooling the two countries’ knowledge.

SOS Jersey are to help and work with Environmental Science students from Brittany with their coastline studies, including sea lettuce research.

Jacqui Carrel, SOS Jersey’s Environmental Scientist, met with Tomas Hull, Head of International Relations at EME near Rennes, and Sid Brown, Principal of St Brélade’s College, to discuss how French students and interested parties in Jersey can collect and share data and findings on the sea lettuce problems in St Aubin’s Bay and Brittany.

She says, ‘We are looking forward to building links with EME students and working long-term with them not only on sea lettuce-related matters, but on many aspects of our shoreline.’

The students are also in Jersey to learn English, so will be based at St Brélade’s college, which is well situated for studying St Aubin’s Bay, and work with SOS Jersey will be conducted in English. 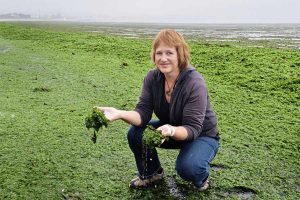 Save Our Shoreline Jersey, which has spoken out on the need to tackle the Island’s seaweed problem in St Aubin’s Bay, recently met visiting students from a school of environmental sciences in Brittany.

As part of their studies, the students spend time in Jersey, where they learn English at St Brelade’s College, which is a few hundred yards from St Aubin’s Bay.

Each year the build-up of green sea lettuce prompts debate on how to deal with the problem.

The sea lettuce makes large sections of the bay look unappealing, and concerns have also been raised about the creation of noxious gases when large quantities of the seaweed decompose.

There is a slightly longer version in the paper on p4.

SOSJ to work with environmental students from Brittany