Readers of our posts and website will know of our quest to get to the bottom of the statement made to the States by the former Treasury Minister Senator Philip Ozouf. 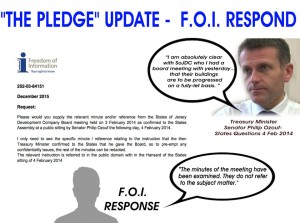 As you may recall, Ozouf confirmed to the House that on Monday 3 Feb 2014 he had instructed the Board of the States of Jersey Development Company that no work would start on their buildings until they were fully pre-let.

Over the months following the commencement of works by SoJDC (including site clearance before planning permission had been granted) we pursued the matter with the current Treasury Minister Senator Alan Maclean, who has variously brushed it aside as a ‘historic Harcourt reference’, and then ‘a mistake’.

Fast forward on to this year and the Building 5 Planning battle continues with a Third Party Appeal (to which SOS Jersey have made a submission). BUT:

++ SoJDC did not follow the fully pre-let condition on Building 4 and do not look like doing so on Building 5.

++ Lee Henry, CEO SoJDC said in a BBC radio interview recently that work would start on Building 5 during the third quarter of this year.

++ Currently, only 25% of Building 4 is spoken for, with no agreements signed on the rest of the building, or any at all on Building 5.

++ Should tenants be found from those currently being courted by SoJDC, those tenants will be existing companies relocating from other St Helier offices, creating no extra inward investment to the Island and leaving existing offices empty.

In December we sent a Freedom of Information (POI) request asking for clarification:

1. Was there a meeting on the day in question and who attended?

2. Was there any record of this instruction and was it minuted? (An instruction of that importance would have had to be minuted.)

A first answer came back from the FOI department.

Yes, there *was* a meeting on that day, BUT ‘not a Board meeting’… it was a ‘quarterly shareholders’ meeting’.

(SOSJ note: as all the board members were present it would also have been classed as a board meeting, so why do SoJDC make a distinction?)

A second FOI answer followed, saying: ‘The minutes of the meeting referred to in the request have been examined. They do not refer to the subject matter of this request.’

Now, the subject of the request was the ‘pre-let instruction’. This means the instruction was not given. If it had been, it would have been minuted.

** We conclude that unless SoJDC ‘mislaid’ the relevant minute and the Board Members and other attendees have collective amnesia, Senator Ozouf seriously misled the States on the matter of the conditions under which SoJDC were supposed to operate.

Our previous report on the pre-let issue can be viewed here.

A recording can be listened to here.