SOJDC RESUBMIT PLANS TO TRY AND AVOID APPEAL, COSTING THE TAXPAYER OVER £100,000. 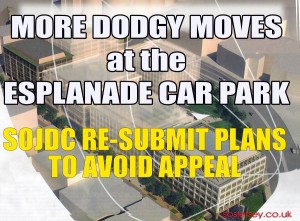 In an unprecedented move to avoid the Planning Department’s recently installed Third Party Appeal process, the States of Jersey Development Company (SoJDC) have reapplied for planning permission for the next Building in their ‘series’ (Building 5).

This building has already been approved but is the subject of a third party planning appeal by rival developers Le Masurier & Co, on the grounds that the footprint is less than 50 metres from land that Le Masuriers own.

A top UK Planning Inspector has been awaiting documents from the developers which have not been forthcoming and has expressed his dissatisfaction with the situation as he had been scheduled to hear the case in November and had to re-schedule the hearing for February.

The panic measures shown by SoJDC who have spent another £100,000 to re-apply (plus unknown but very considerable extra costs on architects and legal fees) are evident. Urgent questions should be asked in the States and moves made to halt this peculiar and unprecedented behaviour by this COM approved and out of control quango.

In the interests of balance, we copy here some comments Lee Henry has made on Facebook and the JEP (on open pages). Just a reminder first: SOS Jersey are not against development per se. We are involved because of the pollution aspects and because of planning contraventions.

Lee Henry Hi St Helier Waterfront Action Group – I just wanted to provide to clarity and correct some of the information in this post.

There are 3 reasons why JDC has submitted a new application for No.5 JIFC:

1. The new Appeal process was said to be a faster, cheaper and that there would be no need for lawyers so that appeals could be determined within 4-months. Not only are lawyers involved with this appeal at substantial cost, it has now been 6-months since the appeal was lodged and JDC has only today received detailed submissions from Le Masurier. Further, following the inspector’s determination, which may be in March, there is nothing to stop Le Masurier appealing against the inspector’s decision, which would delay matters by at least a further 6-months. Due to existing leases, Le Masurier is unable to commence its development until March 2017 and so it’s clear that their sole aim is to delay JDC in order to gain a commercial advantage. This is normal developer tactics across the world and JDC has responded to this delay tactic to protect its commercial interests.

2. JDC is in detailed discussions with and has already issued proposals to tenants that would fill the remaining space in No.4 JIFC twice over. JDC therefore needs a further building with an unchallengeable planning consent ready to begin in order to take forward negotiations with those prospective tenants.

3. JDC is actually saving money by making the new application. The £100,110 is paid to the Planning Department, another States entity. This means that the money is not wasted. Effectively, money is being moved from one States entity to another. However, employing lawyers to make JDCs case to the inspector and defend any further appeals / Judicial Review will cost more than the Planning fee and would be paid to third parties.

What you must understand is that Le Masurier, is a rival developer to JDC. It’s interesting that they did not appeal No.4 JIFC, which is within 50m of their property. Building 5 is beyond 50m of the Le Masurier property and will not be seen from the property once No.4 JIFC is completed. The allegations of breaching the planning law are unfounded and are based on Le Masurier’s assumptions and not on the facts.

For the avoidance of doubt, the position of the building in the new application is exactly the same as the first application and in fact has not been moved. JDC is simply protecting its commercial interest in the same way that the Le Masurier’s appeal of the original permission and delaying the delivery is protecting their own commercial interest on their proposed development.

Each building does not cost £2m to obtain a detailed planning consent and stating this is deliberately misleading the public. In truth, approximately £2m is spent on professional fees to deliver a completed building, but to get to the detailed planning consent stage would incur around 15% to 20% of the total professional fees (including the planning application fee) i.e. between £300k to £400k per building. `

The UBS pre-let is what is in public domain and it’s standard practice for any developer to only make public announcements of pre-lets once the pre-let agreement is signed. As stated, we are currently in discussions with potential tenants and we hope to announce further lettings soon.

Tony Bellows Any potential tenants off-Island or are they all local seeking to relocate?
Like · Reply · 1 · 19 hrs

Tony Bellows If some off Island, what % of potential tenants will that be?
Like · Reply · 1 · 19 hrs

Lee Henry Hi Tony – New tenants coming to the Island require space immediately or within a short time frame. All office developments currently under construction have pre-lets with existing on-Island businesses being RBC and JTC in the two Dandara developments and UBS with JDC. We are currently negotiating with on-Island businesses but have also had enquiries from off-Island businesses for space, but they require the space during 2016 and unfortunately we can’t accommodate this. Provided we have some space remaining in Building 4 towards the end of 2016, we may be able to accommodate new enquiries at this time.

Whilst some may think that existing businesses relocating to the JIFC is of no value to the Island, this is not the case. Businesses relocate because they wish to be more efficient and to provide their staff with a good working environment to attract the best employees. What would be worse for Jersey is if a local business decided to relocate to another jurisdiction. ABN Amro decided to consolidate to Guernsey and shut down their Jersey office at the end of last year. Fortunately, the same week, Barclays consolidated to Jersey and the net job position increased slightly. It is vitally important for Jersey to provided this high quality office infrastructure or businesses will relocate off Island.