Following the resignation of Mark Boleat as Chairman of SoJDC, Nicola Palois will be the new Chair of the Board of SoJDC if the recommendation of Treasury Minister is approved by the States Assembly. What is the (potential) problem? 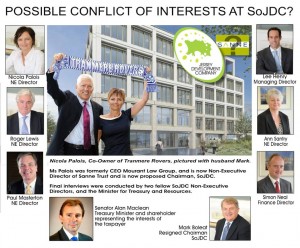 Palois has served until now as a non executive Director of the States owned company SoJDC and has, as a result, been closely associated with the implementation of the current administration’s flagship IFC development project.

But will this cause a possible conflict of interests? Ms Palois currently receives £15,000 for 15 days’ work. Her new post, if she replaces the outgoing Mark Boleat as Chairman, will secure her £40,000 for 24 days’ work.

Her potential appointment, recommended by the Treasury Minister in a Proposition to the States, was undertaken through the Jersey Appointments Commission overseen by the Chief Minister’s office and which has a Code of practice for appointments in such quangos, including the recording of conflict of interest(s).

States Members, when considering this very sensitive appointment should consider the full list of all Ms Palios’ current and recent interests in companies or organisations which might, directly or indirectly, be (or indeed have been when she was a director) in any way in conflict with her SOJDC duties and responsibilities.

They should satisfy themselves, for instance, that Ms Palios’ past and present positions and business connections (eg, CEO of Mourants who acted for UBS in the last minute (only) pre-let in Building 4 of the IFC) as well as her other directorships including one (according to a Google search) at Sanne Trust (also connected with Mourants) who could also be in the market for office space at the International Finance Centre) have all been properly considered.

States Members should ask themselves if Ms Nicola Palios is in a conflicted position given these directorships and her potential appointment as SoJDC Chairman, to ensure the public’s interest is properly safeguarded? ‘

Possible conflicts of interest at SoJDC?