As readers may know, the States of Jersey Development Company (SoJDC) have re-applied for planning permission for ‘Building 5’, of the International Finance Centre. This would be their second building in a series of six in their many times altered and ‘re-phased’ plans for the Esplanade car park. 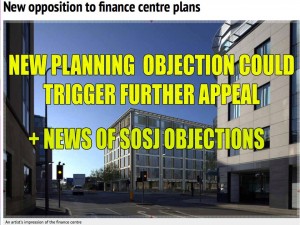 Prozac all round at South Hill, we think, as the planners prepare for the forthcoming Third Party Appeal against recently granted planning permission.

Le Masuriers are appealing using the grounds that the boundary is less that 50 metres from one of their premises. This is not the primary reason they object, but a way to open the appeal process, to put their very thoroughly prepared case (one which SOS Jersey support) to a senior UK Planning Inspector.

Back to the new planning application: SoJDC cunningly moved the goal posts again, this time by re-drawing the boundary lines of the new building (which in itself hasn’t changed) to get within the disputed 50 metres.

It meant a new application fee of £100k+ of taxpayers’ money and heaven knows how much in legal fees to get it there.

Their aim, of course, was to ‘fast track’ the new application through before the Appeal could be heard, thus making a mockery of the whole process.

But lo and behold, rival developers Harcourt (who own Liberty Wharf) have not only put their own objection in to the well known Environment Minister Deputy Steve ‘Lane’ (sic) but may also themselves have grounds for appeal as they contest that Liberty Wharf is less that 50 metres away!

It may be so, but even if not, there will be another round of lawyers rubbing their hands together as they wield their Stanley tapes. There could even be two separate Appeals running regarding two separate planning applications on the same building!

Back to the objections:

You may remember that we presented 340 separate public objections as part of our submission at the last Planning Panel Hearing. However, the Panel were advised by Principal Planner, John Nicholson (who used a very derisory and dismissive tone of voice), that these objections were ‘generalities’ about the Finance Centre and not specifically about the Building itself… and therefore should be disregarded.

We disagree. This was a slap in the face for the public, who must wonder why they even bothered to object and we apologise sincerely for suggesting that they did.

The Panel members, some of whom looked distinctly relieved at this ‘get out of jail card’ (that is, those, who, perhaps, didn’t want to lose favour with the COM?) voted 4 -1 for planning permission. Deputy Russell Labey abstained. Only Deputy Jeremy Macon voted against. Good on him!

Will there be a re-run with the same Panel making the same decision? SoJDC will certainly hope so.

SOSJ have put two objections in against this new application, the first requesting more information from SoJDC on the ground conditions below the site, as the first proved to be wrong – large quantities of asbestos and more incinerator ash than was promised by the Treasury Minister Alan Maclean who erroneously told States Members that there would be ‘very little contamination If at all.’ (You can always rely on Treasury Ministers for the facts.)

No answer was forthcoming from the applicants, so our second objection dated 26 January runs to 28 pages, all relevant to the applications. We will be presenting our evidence to the Planning Panel and our Submission to the Planning Inspector at the Hearing – dates of both to be advised.

The Planning application link from which all the above can be downloaded is here.