Now we can all help Mary Herold – please share.

Last week we reported on the plight of 87 year old Mary Herold. After four years of fighting Planning and the developers, Mary won her last Royal Court Appeal earlier this spring and thought that she could at last enjoy a peaceful summer in her small heritage cottage at Seymour. But… 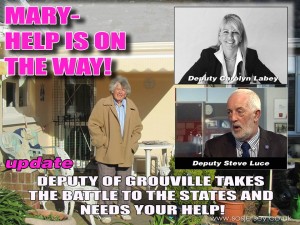 Click here to download a copy of Petition to the President and Members of The States of Jersey about Steve Luce vs Mary Herold. (A PDF for download/printing will open in a new tab/window.)

Not so. The Planning and Environment Minister, Deputy Steve Luce, had Mary served with new court papers whilst she was tending her garden last week, and now she faces a third battle through the courts when she has already had two Royal Court judgements in her favour.
To add insult to injury, the new legal action will be carried our using taxpayer’s money!
The Minister says he is doing this because the Royal Court decision will make it more difficult to develop near listed or heritage sites.

Grouville Deputy Carolyn Labey, who has over the past 4 years, held two parish meetings on the issue, has today lodged a Report and Proposition to ask the States to request Deputy Luce to stop his pursuit of this appeal, to stop wasting tax payers money and if he believes the Island Plan needs to be made clearer, to bring an amendment to that document to the States Assembly. In order to have her Proposition debated on 14th July, she has asked for our help in getting some names on a petition (or ‘prayer’) which will be filed with it.

The final paragraph of the ‘prayer’ reads:
“We the undersigned, petition the States of Jersey as follows-
The Minister for Planning and Environment is requested to stop his appeal of a decision of the Royal Court which ruled against the development planned around Keppel Tower, Grouville.”

We hope that the Chief Minister, being a compassionate man, will not support his Planning Minister with this unjustified harassment of a senior citzen. Deputy Labey’s Proposition seems to be the only way to stop this totally unjust course of action from happening as so far, the Planning Minister has shown no signs of backing down, having not responded to dozens of emails sent on the weekend from many of you and others.

SOS J consider that enough is enough, the Royal Court has spoken twice. Mary should be left in peace.

1: Download the petition and get a few signatures from family, friends, work colleagues etc.

2: Drop in the page (or pages) to any of the outlets below by Wednesday 8th July (at the latest)

Thank you! the Team at SOS Jersey