Following several months of complaints sent to SOS Jersey by members of the public relating to possibly contaminated dust and water escaping from the Esplanade site, the Environment Department have finally responded following an internal investigation. 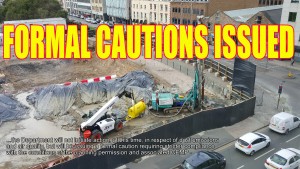 Whilst the letter confirms that breaches have happened, it goes on to say that: ‘The Department is not aware of any breach of planning control that has had an unreasonable impact on public health.’ SOS Jersey disagree.

SOSJ sent a dossier of photographs, reports and a video to Planning, detailing dates times and events relating to the above.

– – The public dust monitoring equipment was ordered late by SoJDC

– – … And when it did arrive it wasn’t functioning

…Yet the condition (set out in the Contractors Environmental Management Plan (CEMP), Section 5.4.3 confirms: ”The Contractor will develop a dust monitoring strategy in association with an air monitoring specialist Contractor.”

The evidence is clear that the public have been exposed to period of dust emissions from an acknowledged extremely hazardous site that could easily have been avoided if the simple precaution of securing plastic sheeting on scaffolding around the site.

At times the dust covered parked cars, the road, passing pedestrians and traffic, and could have contained particles of asbestos excavated from what is a very hazardous site.

The lack of dust monitoring equipment in public areas is admitted.

In years to come should there be a claim (or claims) against the States for a case (or cases) of pulmonary disease which could be attributable to this, then the States would have a weak defence, leaving the taxpayer open to possibly many millions of pounds of damages far more than the £3 million now estimated to be the profit element in this first building, if it does in fact become fully let (as was only last year confirmed by the previous Treasury would be the case, to be before work started).

SOS Jersey have requested that better protection is put in place, albeit too late for Building 4. Should Building 5 be allowed to be built (and there is a 3rd Party appeal currently in motion) then we will press for better safeguards. An interim response has been sent to Environment, and the matter is now in the hands of our Chairman and the Minister.