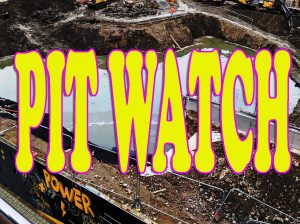 The Environment Department have bunkered down and will not advise the public whether the discharges are safe or not and will not confirm their testing regime, or even confirm to us that they have tested the water on the dates and locations that we asked them to.

They have not pressed any charges so surely there can be no sub-judice issue?

In any case public safety and the safety of the marine environment must take priority!

34 days on from when the Marina first became visibly discoloured, we can supply, with a bird’s eye view, what is really happening at SOJDC’s Horizon ‘pit’, leachate from which is regularly polluting the Elizabeth Marina and the sea beyond – links to pics below.

Our information is not censored by the Department or by Simon Hardwick’s hugely expensive UK style ‘Comms Machine’ who sat on a meaningless press release yesterday for the whole day.

Yesterday was the second time since a resident originally reported the flooding on Environmental Protection’s ‘hotline’  on 21 Feb, that the contractors have tried pumping water out.

The first time was on 20 March, a month from when it was first reported. This effort was not successful.

The geotextile membrane that the Assistant Treasury Minister, Deputy Lyndsey Ash announced to the States a fortnight ago would filter the seawater, could not cope, and the contractors have now dug it out.

On 20 March contractors continued excavating even deeper making the situation worse on days during the high tides.

The northern pit (where they were pumping from yesterday) was filling up on the big spring tides last week and the contractors were washing down rocks with a freshwater fire hose from the red tanker – this water then eventually went back out to the  Elizabeth Marina.

Yesterday, 26 March, the water colour in the Marina was as bad as it has been so far.

Environment Minister Deputy John Young, speaking in the States yesterday, confirmed that the site was contaminated, and said that there was a ‘strong case for a refreshed regime’.

What that means is not clear, but it could echo our call for a truly Independent Environmental Regulator.

As of now, we can only ask: “How can the Department impartially investigate a situation that they have simply allowed to happen?”

Jacqui Carrel of SOS Jersey, speaking to CTV today, for a piece on water quality to be broadcast this evening, expressed concern that pollution could be affecting wildlife in the Marina and further out to sea, including in our Ramsar Area.

Link to video and pictures 20 March.

Link to video and pictures 26 March.