Once again on the current 39ft spring tides, the sea is entering the polluted Waterfront sites and flushing out large amounts of thick leachate into the Elizabeth Marina. To see all the Horizon posts together, click here.

Sediment settles onto the bottom and could be very harmful to marine life. The water then goes out to sea carrying residual pollutants with it.

Flooding of the Horizon excavation and subsequent discharges to the Elizabeth Marina first happened on 21 February 2019 and was reported by  a resident to Environment on their hotline.

The responding officer initially shrugged it off as of being of no consequence, but later Department  asked contractors to do something.

The contractors tried putting some geo-textile on the bottom of the hole to filter the sea water, but it failed to stem the silt from escaping.

We have previously warned the Department that this would happen on any Waterfront deep excavation yet they have allowed this to happen. As if this was not enough, the Water Discharge Permit that they issued is allegedly now not applicable until after the site is sealed and watertight!

The responsibility seems, therefore, to lie with the Environment Department to regulate correctly and not the contractors.

Today’s Jersey Evening Post (JEP) contains plenty of coverage – see screen shots below. It explains what we have done and what needs to be done, but the Department are silent, even not wishing to simply confirm that they took samples from the excavation and the Marina, both from the surface and the silt.

If the results were clear, they should say so now.

Next week sees Jersey hosting an International conference on Marine Protection. We hope that the delegates will be able to advise local officers on this matter as they seem out of their depth.

Paul Chambers, Marine and Coastal Manager at the Environment Department, said this:

‘We are very fortunate to be hosting this prestigious event,’ he said. ‘It gives Jersey the opportunity to highlight recent advances in the management of our marine environment, in particular the creation of marine protected areas covering parts of our coast and offshore reefs.

‘As well as being a signatory to the OSPAR Convention, Jersey has ratified the convention’s annex on the conservation and protection of key marine habitats. This, as well as having the Minquiers and Écréhous accepted as part of OSPAR’s Marine Protected Areas network, strengthens our links with the multinational organisation.’

The silence and inaction is not good enough and both must be remedied as a matter of urgency.

You can help by lobbying politicians; thank you. States of Jersey contact details are here.

Letter from SOS Jersey to the JEP

A month ago, SOS Jersey reported flooding of the Horizon site and thick and murky discharges into the adjacent Elizabeth Marina to the Environment Department. Its response was: “We are taking this incident very seriously and are in the process of collection of evidence as part of a formal investigation”; and: “We are reserving the right of legal injunction or stop notices.”

This week has been no response to the JEP from the Department regarding the results of their investigation and what steps are to be taken to mitigate further potential pollution.

The response that has now been given does not answer the questions. Meanwhile, residents have observed that measures taken by the contractors so far have not stopped the murky discharges.

At the end of this week there will be two spring tides exceeding 39 ft which could flush out further thousands of gallons of potentially toxic leachate from the Horizon site into the sea via the Elizabeth Marina. Due to the urgency of the situation the investigation should by now have been concluded and decisions taken as to how it could be mitigated.

But why has this all come about?

An officer from the Department informed a resident that the water discharge permit issued to the contractor did not cover the flushing out of contaminated material to sea but only groundwater accumulating after the initial excavation had been sealed. This makes a nonsense of, and is contrary to, the public understanding of the permit.

If the discharge permit is not applicable why has the regulator allowed the potential for major pollution to occur again? If residents had no 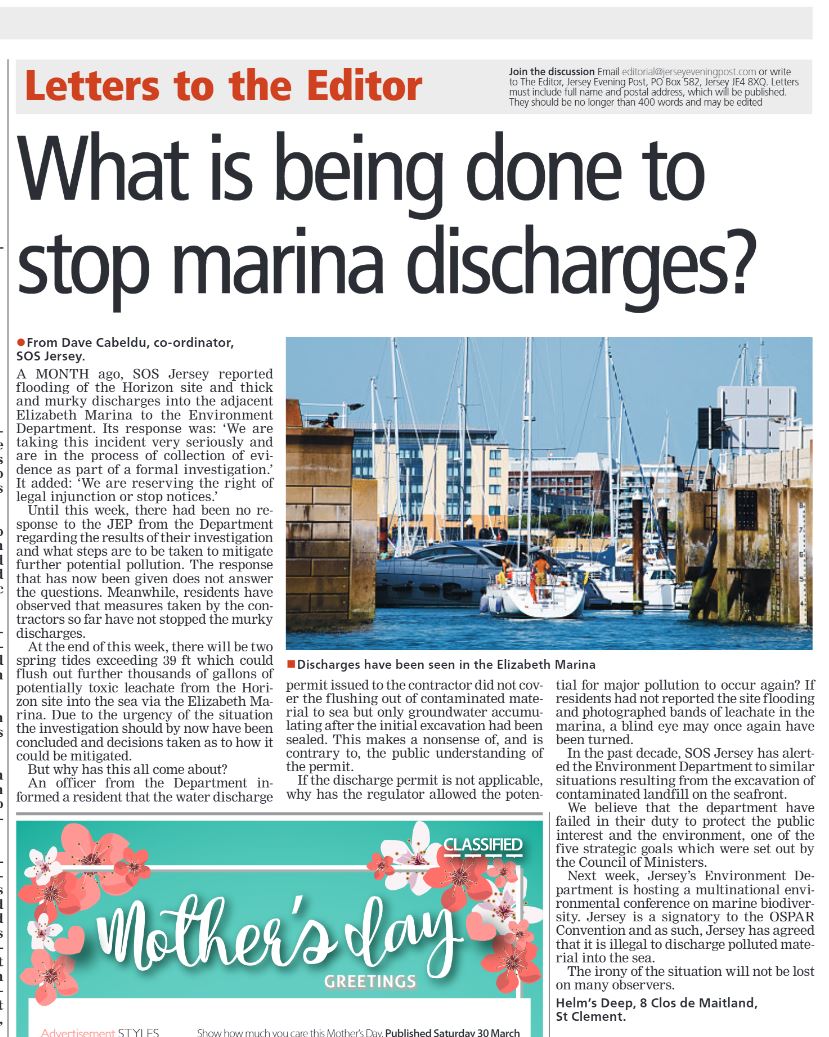 t reported the site flooding and photographed bands of leachate in the marina, a blind eye may once again have been turned.

In the past decade, SOS Jersey has alerted the Environment Department to similar situations resulting from the excavat

ion of contaminated landfill on the seafront.

We believe that the department have failed in their duty to protect the public interest and the environment, one of the five strategic goals which were set out by the Council of Ministers.

Next week, Jersey’s Environment Department is hosting a multinational environmental conference on marine biodiversity. Jersey is a signatory to the OSPAR Convention and as such, Jersey has agreed that it is illegal to discharge polluted material into the sea. The irony of the situation will not be lost on many observers.

With spring tides of over 39 feet expected this weekend, environmentalists have raised fresh concerns that the water which floods portions of the site – where 280 luxury flats are under construction – and is then left to drain back into the sea may be picking up contaminants from landfill used when the area was reclaimed decades ago.

The issue was first brought to light last month as the excavation of the underground car park coincided with high tides and the seawater filled the area.

Photographs and videos of the flooded site and of visibly murky water in the marina have been widely shared among Islanders and in the media.

On 21 February, environmental protection officers said ‘they were looking into reports’ but one month later, as the site has again flooded, it is unclear what action, if any, has been taken.

In response to questions on what was being done, the JEP was told only that the ‘incident is still under investigation’ and officers ‘were unable to comment further’.

The States press office has confirmed that the incident is being investigated under the Water Pollution (Jersey) Law 2000.

The co-ordinator of Save Our Shoreline Jersey is now calling on Environmental Protection to tell the public what is happening.

The department is ‘failing in its duties to protect the public interest and the environment’, Dave Cabeldu wrote in a letter to the editor published on page 12 today. And he has highlighted the fact that the department is preparing to host a multinational environmental conference on marine biodiversity next week.

‘Jersey is a signatory to the OSPAR Convention and, as such, Jersey has agreed that it is illegal to discharge polluted material into the sea,’ he wrote. ‘The irony of the situation will not be lost on many observers.’

Mr Cabeldu – who recently received an MBE for his conservation work – said more should have been done over the last month.

‘Due to the urgency of the situation, the investigation should by now have been concluded and decisions taken as to how it could be mitigated,’ he wrote.

He said that this weekend ‘there will be two spring tides exceeding 39 feet which could flush out further thousands of gallons of potentially toxic leachate from the Horizon site into the sea via the Elizabeth Marina’.

SOS have questioned whether the water discharge permit issued for the site is sufficient to protect the surrounding area.

Under the terms of the permit, discharge from the site, including groundwater, should be passed ‘through a settlement tank and sand filter’ before it is allowed to soak away at specific designated points.

The permit annex suggests this is to protect the environment from a variety of potential contaminants including arsenic, cadmium, chromium, copper, lead, mercury, nickel and selenium, among others.

‘An officer from the department informed a resident that the water discharge permit issued to the contractor did not cover the flushing out of contaminated material to sea but only groundwater accumulating after the initial excavation had been sealed,’ Mr Cabeldu’s letter said.

‘This makes a nonsense of, and is contrary to, the public understanding of the permit.’

The JEP tried to get clarification on whether tidal water is covered by the permit by approaching the government communications unit and sending direct questions to Natural Environment director Willie Peggie and director of Environmental Protection Tim Du Feu. Both responses to the inquiries came back from the communications unit, to say only that the investigation was ongoing and no further comment was being made. Another environmental group watching the situation has been taking their own water samples.

Andrew Le Quesne from Earth Project Jersey collected a sample yesterday as the tide was receding and visibly cloudy water was draining into the north-east corner of Elizabeth Marina.

He said he would be taking the sample to the States analyst.

The French contractors building on the Horizon site were asked for comment but no response was received by the time of going to press.

The States Assembly was told last week that a number of measures had now been implemented to stop silt entering the nearby Elizabeth Marina during high tides.

Assistant Treasury Minister Lyndsay Ash, speaking on behalf of the States as the sole shareholder in the Jersey Development Company, said he had met officials to discuss it.

‘They have installed a geo-textile membrane on the area where the deep excavations are taking place in order to act as a filter which will prevent silt from exiting the site on the fall of large tides,’ he said.

‘And they have committed not to carry out works in the area concerned during high tides, so as not to further disturb the soil.’