SOS Jersey have known for some time that UBS were likely to sign up for part of Building 4 – the first building of six. Building work cannot proceed under the as yet unchanged Memorandum of Understanding that exists unless the COM break their agreed terms. So, we need to ask… 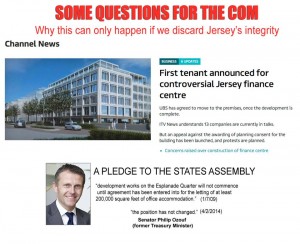 We understand it’s approx 20,000 sq ft or less (two floors) This is ONE TENTH of the floor space required by the States before the project can start.

Former Treasury Minister Philip Ozouf pledged to the States on 4 Feb 2014 that 200,000 sq ft would be necessary (Hansard – see below for full extract).

2: Are the JDC giving UBS favourable terms? Mark Boleat this morning would not say as it’s ‘commercially sensitive’ but if they are not, there should be no problem confirming it.

We understand that UBS could be getting terms that a private developer could not give them, possibly two years’ rent free. (If that’s wrong, we stand to be corrected).

3: Who will paying for the construction? JDC say ‘third parties’: ie, a bank loan.

The States will of course be the fall back guarantor in case of problems – in other words, you, the taxpayer. Remember we have already paid well in excess £5million to the JDC, much in large directors’ salaries and bonuses.

Delivery of the masterplan is still not possible
The phasing plans for building 4 (P/2012/1141) still require a £ 13m loan to be paid from the States Currency Fund.

On the 4th February 2014 Deputy J Le Fondré asked, ‘What I would just like to ask as well as a first supplementary; previously in a statement to the Assembly the Minister has stated: “That development works on the Esplanade Quarter will not commence until agreement has been entered into for the letting of at least 200,000 square feet of office accommodation.” Could the Minister confirm whether this position has changed in respect to the present planning applications and if there is to be any reduction in pre-let areas and, if so, why and when he was going to announce this to the Assembly bearing in mind what is, therefore, the increased risk to the project?’

Senator P.F.C. Ozouf replied “No, the position has not changed.”

We feel that as this pledge was not taken back to the Sates for revision then it must stand. If it does not and the COM have acted without reference to the States than our system of democracy has sunk so low as to be meaningless.