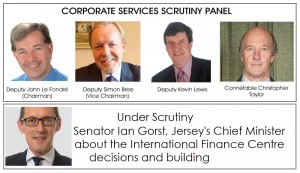 Some of you may remember John Richardson as the man who agreed the ghastly incinerator should be placed at La Collette and the man who allowed the purchase of second hand containers in which to store our huge amounts of asbestos waste.

Back to the meeting. We strongly recommend you view the full transcript when it is ready – the transcripts usually take 7-10 days to appear here.

We also suggest you hear BBC Jersey’s take on the meeting – it will save me typing out a lot and also it makes for good listening!

I am sorry, dear reader, but I can’t write that fast and my notes included the word ‘WAFFLE’ (the word also neatly encompassed obfuscation) at several points, but we got the gist. Here are a few points on top of the first radio link (above).

Much was made throughout about mitigation of risk. We also heard the CM based his opinion on little risk and future profits on the say-so of the SoJDC and their ‘third-party lender’. Later on, he finally admitted that though the States had been assured the Master Plan carried no risk, that was not the case now.

Crucially, the CM, when asked if he were satisfied whether the Treasury Minister Alan Maclean had undertaken the necessary levels of due diligence on the Master Plan’s conditions and the Memorandum of Understanding, he finally said he was ‘not aware’ of it.

Shockingly (amongst more waffle and obfuscation) we also heard that content from the 2008 report had not been made available to the States when they made their decisions on whether or not to pass the Master Plan.

What was the content that had been withheld? Just that the authors considered the Project would make a loss. Yes, read that again.

Why was it not shown? The Chief Minister said it was based upon when the Master Plan would have been carried out in one go (rather than in phases as is now the case), that it was confidential, and that it wasn’t relevant. He admitted he was not sure the 2008 Report wouldn’t have influenced the outcome.

There was much more and it will make interesting reading when the full transcript becomes available.