MIDDLE JERSEY COMES OUT IN FORCE!
A PLEA FOR COMMON SENSE – AND WHAT NOW?

This perfect June afternoon, the Ring Around the Esplanade Car park protest (very well organised by Sean Power and others in the Waterfront Action Group) sends a clear message to the Council of Ministers. The huge car park could have been ringed nearly twice we think, as nearly 2,000 people came down to show their support. 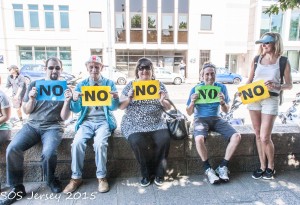 The public are not stupid and do not want to patronised or have the reasons for what has recently happened ‘explained to them’ at public meetings when they can quite easily work out for themselves what is truth and what is spin. These meetings are not well attended and that is not apathy – it is frustration at being patronised. People like to be consulted beforehand, not afterwards.

Many people approached SOS committee members this afternoon and the messages are the same. They are fed up with decisions being made on their behalf with their money (yes, ultimately it is public money at risk) particularly which break the policy agreed on by the States.

Yes, many we spoke to said, a Finance Centre could be a good thing but only in the context of delivering the wider agreed masterplan and as part of a mixed development as promised. But not to be developed by a States quango risking public money.

To sign with UBS on a limited pre-let is they believe, contrary to the understanding that everyone had. They believe that the Chief Minister, Treasury Minister and others are so desperate to get a tenant that they have torn up the rules and done a U-Turn on policy.

They are also angry that the trees were illegally felled, and planning obligations broken. They are angry that Planning ignored their  many objections on Building 5. They feel that the COM  is letting them down (those Ministers who off the record do have doubts having to toe the line).

Many told us that above all they feel that Scrutiny have been ignored and derided by Mark Boleat, (UK ‘drop in’  Chairman of the SoJDC) as being ‘an irritant’. A remark that cuts deeply through democratic hearts and minds. Scrutiny, the public agree, has been intentionally  impeded and must do its job before any building starts, or else our Ministerial system has no integrity left.

Ministers have recently told us that we have no public support, we (the public) are a vocal minority – today they can see for themselves that they are mistaken and surely, must now listen.

So what happens now? Tomorrow the CSSP (Corporate Service Scrutiny Panel) call in the Directors of SoJDC to answer questions which have yet to be answered.

If you would like to come tomorrow to the Hearing, it’s in the Le Capelain Room, the entrance in the States Building from the Royal Square. It’s open to the public at 2.30 p.m. If the venue is changed we will let you know. You can’t speak but you can listen first hand.

Let us not waste this afternoon’s protest or accept any more spin.

Finally:
Thank you all our SOS Jersey members for showing up in force- I’m sorry if we couldn’t stop to speak to you all- your presence was very much appreciated. We will of course keep you up to speed. 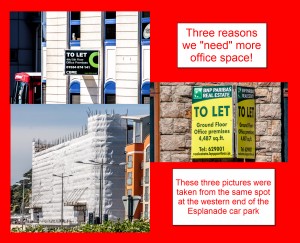 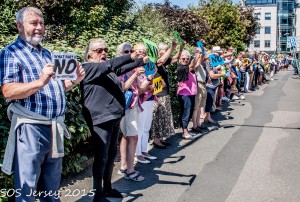 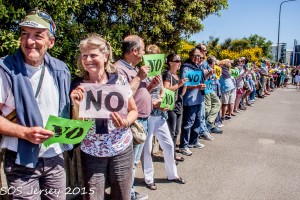 Esplanade protest goes with a swing!