This post will be very brief as there is a lot happening today and a fuller report will follow as events unfold – and they will shortly, we understand.

At the Town Hall last night following the predictable presentation on the International Finance Centre by the Chief Minister, Treasury Minster, Chairman of Jersey Finance and CEO of the SoJDC, the public were allowed to ask questions.

Not enough time was allowed for questions, leaving many people angered about not being heard.

The SOSJ team managed to get three questions through:

–SOSJ  Chairman Michael du Pré ( also a Chartered Accountant) highlighted the problems of the funding calculations that do not add up.

He suggested there was no reason why Scrutiny could not be privy to the same confidential information available to the Treasury Minister.  Scrutiny need this information (in confidence, of course) to do their job and it had not been forthcoming.

He also said that Planning had turned  a blind eye to planning obligations being broken on this project.

In a nutshell, the public are in fact underwriting this project.

— Jacqui Carrel received an undertaking that data will be provided by the JDC relating to historic contamination under the site; however, although this question has been answered thus twice before, there is no date for when these data will become available.

She was assured about concerns about the management and removal of the contaminants (including airborne risks with asbestos loads) plus the possibility of leaching to sea of heavy metals, but the answers were without detail – assurances do not mean reassurances!

— Dave Cabeldu was severely limited in what he could ask. He also wanted to say a few words about SOSJ work on this subject, but was told he had ’90- seconds’ to do him both (which threw him off) but he did ask the following question which is reproduced verbatim:

Question to Lee Henry, CEO of the SoJDC

On Monday of this week,  the Corporate Services Scrutiny Panel requested that you locate the minutes of the board meeting on 3rd February, 2014, that the Treasury Minister told the States on 4th February 2014 that he attended a meeting with his Assistant Minister, The Treasurer of the States and Directors of the SoJDC.

In that meeting he made clear his instruction that all buildings were to be fully pre-let.

I’m sure you have by now done so,  Can you confirm whether the date was as he said,  who was at the meeting, and do the minutes record that important fully pre-let promise?

The relevant  statement was this:

In answer to a further question from Deputy John Le Fondre on the fully pre-let pledge, Senator Ozouf said this: “…so while I am absolutely clear with SoJDC who I had a board meeting with my Assistant Minister and the Treasurer of the States yesterday, is that their buildings are to be progressed on a fully-let basis in order to reduce the risk.” (sic) (Hansard 4/2/2014)

This question was not answered though several people in the audience cried, ‘Answer the question!’ both at that time and as the meeting was closed.

Dave also put the point that the Ministers keep making that there had already been five States Debates on the IFC.  Dave said the he was quite sure that if States Members in any of the five debates had been told that only 25% of one building would need to be pre-let in order to start building, not one States member would have voted ‘pour’.  SOSJ have confirmation today that it is normal for a developer who is risk averse to secure pre-lets for 75% of the floor space)

++ Something has gone horribly wrong with the democratic process

++ The project is now constitutionally flawed

++ The project should be held for four weeks until Scrutiny have received the evidence that they requested from the JDC on Monday  and produced their report.

Today sees a critical Scrutiny meeting at 1.30 p.m and SOSJ will be there. 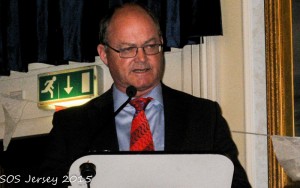 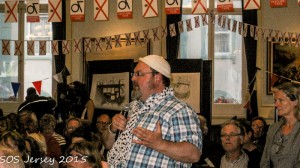 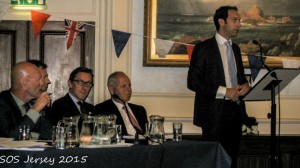 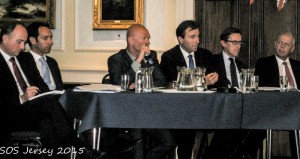 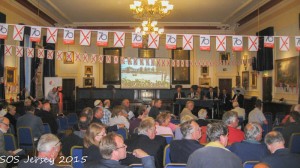 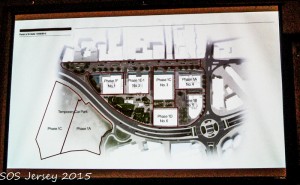