Click the link below to hear the question put by Deputy John Le Fondré on 4th Feb 2014, and Senator Philip Ozouf’s reply.

Not working? Click here to open in new browser. 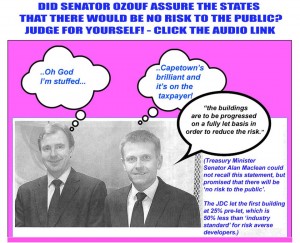 “No – the position has not changed,” said the Senator with no hesitation.

And did Senator Ozouf confirm that all buildings would be pre-let before construction started?

According to Senator Ozouf they were ‘fully clear on this’. (It should be recorded in the minutes of the JDC board meeting the day before).

Did the Minister make a mistake as Senator Maclean states?

We think not. But you can judge.

Our London based globe trotting Assistant Chief Minister certainly tried to avoid directly answering the ‘fully pre-let’ question by going around the houses while he worked out how to deflect it (his trademark style) after confirming the first question, but he then confirmed that all buildings were to be fully pre-let.

In five debates on the International Finance Centre, every States Member who voted ‘pour’, did so in good faith in the belief that the public were adequately protected by the fully pre-let pledges, including debates and questions, post Harcourt, contrary to assertions by our current Treasury Minister.

If any of the ‘pour’ camp had been told that the conditions would be secretly changed to allow construction to happen after a 25% pre-let one one building only, no member in his or her right mind would have agreed. If this information had emerged before the November election, whoever sanctioned it would surely not have been re-elected. It is notable that the IFC didn’t feature many (if any) election manifestos.

SOSJ will be making an announcement shortly about what action is possible. On Tuesday, Deputy Monty Tadier will, in his amended Proposition, ask the States to wait for the Scrutiny report before allowing work to commence.

Tomorrow at 4pm Senator Alan Maclean will give evidence to the Corporate Services Scrutiny Panel. We will be there and will report back.