Is planning permission for building No 4 still valid and being followed? (And was the tree clearance legal? Lawyers think not.) A letter sent yesterday to all States Members from Law Firm Collas Crill casts grave doubts.

Some conditions are not being met 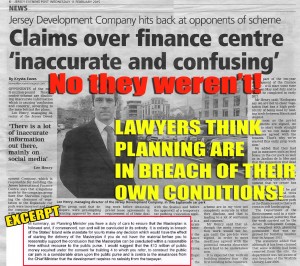 It transpires that the permission for Building 4 was reliant on several crucial conditions, including £13m of taxpayers money in a loan to SoJDC, some of which cannot now be met.

In response to a letter from the Planning Minister Steve Luce, assuring them that the work that had started was legal, a letter from Collas Crill has now been sent to all States Members highlighting the conditions that appear to have:

in accordance with the conditions of the planning consent.

Regarding the initial site clearance that has caused so much public outrage, that work should have been carried out under Condition 18, which requires a Constructional Environment Management Plan

In breach of this condition was the tree clearance works which were undertaken all day Saturday and Sunday with chainsaws. (The letter states that these conditions have been breached and asks why.)

Of course, as important as the trees were, this is only the tip of the iceberg.

Also included is a letter (dated 18 December 2013) from the MD of the JDC, Lee Henry, outlining the key conditions that he agreed to satisfy on the JDC’s behalf to fulfil the planning consent.

Both letters, received yesterday by all States Members are available from the links at the foot of this post.

What the SoJDC have changed

SoJDC had committed, in the phasing plan, to relocating the public car park as a ‘key piece of public infrastructure as one of the first phases’.

For this, a £13m loan, from the States’ Currency Fund, will be required.

This is a total change to their new phasing plan, which will have much of the traffic driving past Castle Quay / cinema when public car parking is on the wrong side of the underpass for the next decade.

SoJDC are just doing anything to build a single building and worrying about the masterplan delivery at a later date.

However on a better note, we have received (and accepted) an invitation from Lee Henry to meet him, and our Chairman Michael du Pré is flying over on Sunday to take up the invitation and we hope that we can find some common ground.

In particular we would like to discuss the JDC’s new plans for the Heritage Sea Wall which we managed to save (most of) from planned destruction last year. We look forward to meeting him regarding his plan to save and enhance the last curved end (opposite the Tourism Building).

Click here for the letter from Lee Henry to Planning

Esplanade: are Planning in breach of their own conditions?